Minorities in the Community 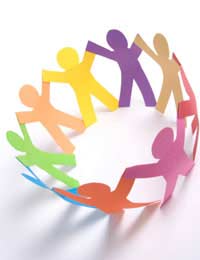 These days there are minorities in almost every community. Some will be obvious by the colour of their skins (and that could just as easily be a white minority as people of colour, remember), while others aren’t as obvious – it becomes a matter of language.

But all communities are essentially constructed to serve the needs of the majority of the population who share a common language and culture. That means that minorities in the area can feel excluded, and bringing them into the larger community often isn’t easy.

It’s human nature to be prejudiced. Many of us say we’re not, and indeed, most of us are very tolerant, but there are always those who are prejudiced to minorities and show it. Insults, graffiti and violence can make minorities feel unsafe in a community, so the first thing necessary is to offer them a feeling of safety.

Reaching out in that way to minorities helps make them feel welcome. Of course, it’s not easy, because it means identifying and talking to those who are prejudiced and acting on it. But as a community action you’re making the entire neighbourhood better for everyone who lives there, not only the minorities. However, the action you can take is limited, so be very aware of that.

One of the major keys is to make minorities a vital part of the community. That means involving them in the running of the community, as part of a neighbourhood group or in the community centre committee. Not only does this make them feel drawn in, it makes them more visible, which is a good thing, letting everyone know they’re there and accepted.

When there’s a neighbourhood event, invite the minorities (there might well be several within the community) to participate. Asking them to perform, perhaps, and illustrate their culture, or offer food from their homeland can be a great introduction, and help them get to know people in the area – and people to know them.

One thing a minority will want is to be able to buy familiar foods from home. When there are enough people in an area, shops will open to cater to that demand, which is what’s happened with the Polish population in Sheffield and elsewhere in the UK, where there are so many Poles that some began opening shops to cater to the needs of the others.

Before that time, though, there will still be the need for minorities to buy those groceries. Having local shopkeepers stock them will help, and it will also make the minorities feel more welcome, as well as bringing others into the community to spend money.

Often minorities feel voiceless and powerless. Giving them a say and letting their concerns be heard, both in the neighbourhood and in a larger area, such as a city, is vital. Remember, too, that there can be unseen minorities for whom coming out of the woodwork might be hard, such as gay or lesbian groups, for example; in other words, there are also minorities within minorities who need to be considered as part of the larger picture.

It’s natural for strong bonds to exist among minorities, after all, they’re together in a foreign place. The more they can be integrated into the larger community, the less the likelihood of the area in which they settle taking on the overtones of a ghetto.