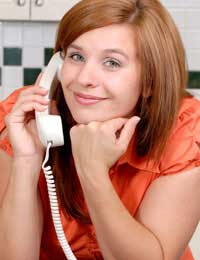 The phone tree is an American idea that’s yet to catch on here but it’s an ideal way to quickly inform people about meetings, urgent community issues and all manner of things. It’s the essence of simplicity to work, but probably one of the most effective communication tools you can employ, since virtually everyone has a phone.

At its heart, the phone tree is a pyramid, with the co-ordinator at the top who makes the first call to two or more people. In turn, they call an assigned set of people and so on, until the tree is complete.

By doing the maths, it’s easy to see that an area can very quickly be covered this way, getting out the message easily. It’s certainly a lot easier than one person having to sit down with pages of numbers to call, repeating the same thing over and over. It’s more personal than e-mail, although it does have its limitations – it’s really only effective for short messages.

No one should have to make more than a maximum of eight calls – even fewer is better, if possible. But they need to have all the contact numbers for the people they’re trying to reach, which means home, mobile, and work, and members need to persist on all three numbers until they reach the person. If they’re not able to contact him or her, they need to report that back to the co-ordinator.

Although a phone tree is often used in the US with a script about the action desired (such as calling a member of Congress), it can quite easily be applied to community issues, and might well be more effective that way.

Once the co-ordinator has all the volunteers in place and briefed on what they have to do, the real test comes with the first call. In an ideal world, you’d have an unimportant test call, but that’s not practical. The volunteers should have a time frame in which to make their calls. For obvious reasons, it might not be practical for them to do it immediately, but within 12 or 24 hours should be feasible. A couple of days after the initial call, the co-ordinator should check volunteers further down the tree to make sure they’ve received and passed on the message.The co-ordinator will also need to know when people involved in the tree are going on holiday in order to be able to bring in someone else.

The Problems with a Phone Tree

Like any volunteer organisation, the phone tree is only as strong as its weakest member. It relies on everyone being diligent and making the calls they’re supposed to make. If two of three people fail, then the entire structure collapses. That means the co-ordinator has to bring in reliable people, and not be afraid of replacing those who don’t measure up.Additionally, it’s a resource that shouldn’t be overused, or it will lose its effectiveness.

The Community Centre
Share Your Story, Join the Discussion or Seek Advice..
Phone trees work very ,in Australia we use them primarily to alert communities about bush fires . You could use them for floods orweather .
Al - 15-May-14 @ 10:16 AM
If it's an issue that really rouses the community, such as building new houses on a green space, a phone tree can be very effective. In other words, the more local the issue, where its impact will be seen and felt in a small area, a phone tree is very efficient. The wore widespread the area and less visible the problem it is more likely to break down with people not following through, as it'll seem less urgent.
William - 25-Jun-12 @ 6:48 PM
Title:
(never shown)
Firstname:
(never shown)
Surname:
(never shown)
Email:
(never shown)
Nickname:
(shown)
Comment:
Validate: