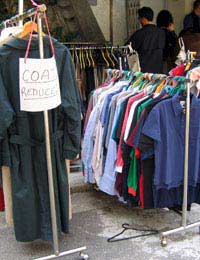 A Neighbourhood Watch is a community initiative; it all happens from the ground up. The police and main Neighbourhood Watch group will help with literature and other things but essentially it’s self-funded. Of course, it doesn’t cost a lot to run one, but even so, the money has to come from somewhere, and no one can reasonably expect the volunteers to pay.So what are the options for raising money? Quite plentiful, as it happens. It’s also a good way to tie the Neighbourhood Watch in to other community groups, who might be able to do the fundraising for it, as well as closer to the area it serves.

Yes, there’s the usual jumble sale, or the bake sale, and they have their place. But it can be a lot more fun to think outside the box and be imaginative.

One excellent way to really involve the community is by having a neighbourhood garage sale – as many of the houses as you can. Advertise it well in local papers (you might even get a mention on local radio if it’s for the Neighbourhood Watch) and hold it on a Saturday or Sunday morning in the summer (make sure it is the summer, since you need good weather for this). It can be an excellent, and fun, way to raise money, plus people in the neighbourhood come together and bond a little – as well as get rid of plenty of unwanted items. The idea originated in America, but little by little it’s been finding favour over here. You might well be surprised at how much it can bring in, and it can become a much-anticipated annual affair.

Another idea, though not as lucrative, involves kids. Have boys and girls aged around 12 offer to cut lawns in the neighbourhood or wash cars to raise money for the Watch, charging a set amount as it’s for a good cause. Every little helps, as they say, but more importantly, it involves a new generation in the Watch.

Another idea imported from America is to sell chocolate goods to benefit the Watch. It needs to be something special and not readily available (there are manufacturers who specialise in these kind of items), and volunteers can go door to door in the neighbourhood taking orders. Again, this can be an excellent annual fundraising event, especially if the chocolate is very good.

There are plenty of other unusual ideas you can find to help raise money for the Watch. Search around or come up with your own.

All of the ideas above bring the community in, and that’s very important. Fundraising is a good way to make the community feel involved in the Watch, and to be able to contribute to what you’re doing, with a sense of belonging.

Anything that binds the community together is good, and it could have the added effect of even bringing in a few more volunteers, just as an added bonus.One or two good events a year can bring in enough to fund the Watch for 12 months, possibly with some left over. When your Watch has acquired a good surplus, consider throwing a thank you party for the community.

Developing Your Neighbourhood Watch
Share Your Story, Join the Discussion or Seek Advice..
@Marmottan. Boys and Girls can do both? We can't see where it says otherwise in the article sorry. The idea is that the community raises money for the neighbourhood watch, so it's not unpaid labour really. It's very common in the UK for older children to do this kind of thing to raise money. You will also see them helping to pack bags in supermarkets etc. It's entirely voluntary - no one is forced into it.
CommunityGroup - 3-Dec-14 @ 10:00 AM
So only boys aged 12 are able wash cars and cut lawns, not girls. I had not realised that was the case. I would also like to know when it became acceptable to employ unpaid child labour to meet adult ends? Do think before publishing. What could have been a useful article was destroyed for me by the above foolishness.
Marmottan - 30-Nov-14 @ 9:48 AM
Title:
(never shown)
Firstname:
(never shown)
Surname:
(never shown)
Email:
(never shown)
Nickname:
(shown)
Comment:
Validate: