Home > What Is A Community? > How Communities Have Changed 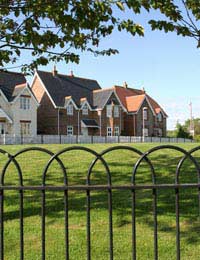 Listen to the older generations and so many of them say there’s no sense of community the way there was when they were young. They’re probably right since communities have changed, although it’s not necessarily all in a bad way. The grinding poverty and terrible conditions that characterised some neighbourhoods have gone, and that can only be a good thing, for example - you won’t find houses these days without bathrooms and indoor plumbing.But they’re right in the sense that there’s no longer the idea of people being bound together by the place they live. However, that might not be as bad as they imagine, as other types of communities have risen.

In one word, it was redevelopment that changed everything. After World War II, the worst of the remaining slums were bulldozed and people relocated on new estates, which included the new idea of tower blocks of flats. But it was never the same. Relationships that had grown up on streets over decades and lifetimes altered as people were shifted hither and yon, and they never re-established themselves in the same way.

The other major factor was when the idea of owning your own house became the norm, and much of the stock of council housing was sold off. As property values increased, people sold their houses and moved into what they saw as better neighbourhoods, whether it was for improved schools for their kids or a host of other reasons. It gave rise to a more mobile population that didn’t put down roots in a community the way their ancestors had done. There was no longer a sense of belonging, and people knew fewer of their neighbours.

Modern communities still tend to be more transient – just look at the number of ‘for sale’ and ‘sold’ signs on the houses in your street as an example. Some communities, especially in larger cities, change regularly, becoming home to waves of immigrants from different parts of the world.

But whatever the type of neighbourhood, there will always be a sense of community about it, whether rich or poor; in fact, poorer neighbourhoods often have a greater sense of their identity that the wealthy ones, if only because people live more closely together.Although people come and go, in any community there will be long-term residents, and they are the heart of any neighbourhood. They help hold it together. If you want to understand the area, those are the people to talk to. They’ll care about it; they can tell you its history.

In a lot of ways, community these days is less about where we live, and more about other things in our lives. It can be school, a place of worship, a pub, a team, even global communities that have sprung up thanks to the Internet – sometimes those remain far more constant than the places we live. Communities grow up around all of those, and they’re all equally valid. As humans, we make communities around ourselves, it’s our natural instinct.So, even though it might seem as if we’ve lost our sense of community, we haven’t really. It’s just changed. Look deeper and you’ll find that it’s as solid as it ever was – it just exists in different ways now.

Community Centres: What Part Can They Play?
Share Your Story, Join the Discussion or Seek Advice..
Changes like bridge, road etc are not stated
Nedol - 27-Jul-20 @ 4:12 AM
hi their now as well\iwent in to crosby for abus ride and as iwas going in to ashop now called food for go two lads went in to ashop and as iwas comeing out and going to get the bus too kids about 5ft 4inches tall come out and spat at me for no reason at all niow idid tell the woman and she did` say to them have yiou spit at this lad and they said that they did not at al;l now one too and aother time I aboared abujs and in september 2013 and as soon as we giot to john lennon airport abrick wentbright window and the glass smashed and we did reort it to the driver but nothing got done about it at now from dave vowens you are not safe any more in the commnty from dave owens 5 walton breck road anfield l4 0rb
OWEY - 29-May-15 @ 4:09 PM
Title:
(never shown)
Firstname:
(never shown)
Surname:
(never shown)
Email:
(never shown)
Nickname:
(shown)
Comment:
Validate: