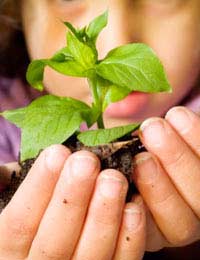 Carly James is mum to three boys and takes the environment seriously “It’s their future I’m thinking about. We have to act now to protect the world for them.” When she joined the Parent Teacher Association at their primary school she was determined to make a difference. “I had read about green schools in the States and wanted to suggest that we could do something here too.”

The initial emphasis for Carly was on reducing the toxic chemicals used in paints and other equipment in schools and outdoors. For example by researching the topic she convinced the school to find an alternative to chemical pesticides for the lawns and grounds. Native flowers and shrubs were planted “they are naturally hardier” and mulches of leaves and bark put in place to stop the growth of weeds. Instead of toxic weedkillers sprays of horticultural vinegar were used to kill weeds.

“It makes so much sense, not only is it far kinder to the environment it also makes for a safer place for our children to play.”

The school also adopted non-toxic cleaning products using organic, biodegradable and naturally fragranced ingredients. In some cases, by using eco-friendly natural ingredients such as vinegar and lemon the school discovered it could actually be cheaper than the more toxic products they had been using. Funds were raised to repaint the school using non-toxic paints and to introduce a host of plants into classrooms. “Plants are one of nature’s most efficient ways of purifying the air. Peace lilies and Arica palms are amongst the best.”

Another innovation was the introduction of ‘crocodiles’ to replace car journeys wherever possible. “Some of the parents did already car pool to share driving the children to school but we wanted to encourage walking.” Carly says. Now pairs of parents operate a rota system of picking up groups of children along a route to school and safely walking crocodile-fashion with an adult at the beginning and end of the group. “Not only does it cut down fuel emissions and save on petrol costs it is far healthier for the children and much friendlier too.”

Involving Parents and Children in Caring for the Environment

Parents were involved throughout the process which received their wholehearted support. “We encouraged each other and began finding out more information. A lot of us began applying the same principles in our own homes and exchanging pieces of furniture with toxic formaldehyde fumes with healthier, more eco-friendly pieces.” The children were involved in the process too; learnt all about recycling and when they learnt about carbon footprints were keen to do something about it. “It was the children’s idea that we hold a tree planting day.”

Following talks with the council and local amenity groups a piece of ground near the school was designated for the tree planting. The children raised funds for the trees by a sponsored walk and planted over 100 birch, ash and elder trees in what had been an overgrown area of wasteland. This was covered by the local newspaper and helped raise awareness of environmental issues within the wider community.

This has led to connections between the school and other groups in the community to carry out further schemes. “Our latest project is a wildlife sanctuary at some local allotments. There will be bird boxes, a pond and plenty of herbs and wildflowers to encourage butterflies and bees.” According to Carly “We can all do a little bit that adds up to make a big difference to our environment.”

Setting Up a Residents Group: A Case Study